Yo, what is this freshie fish?

Seen at the Bass Pro Shop in Concord, NC in their sportsman’s aquarium. No signage to speak of so that’s my dilemma.

It’s been bugging me since i was there in Feb 2021. I even asked a guy who worked there, but he wasn’t involved in the aquarium. Apparently Bass Pro contracts out to professionals, and i can’t blame them!

This was a big fish. There were lots of big fish in there. All freshwater.

After a lot of Google research, i have an idea what it might be, but i wanted to hear your thoughts unclouded by my guesswork. 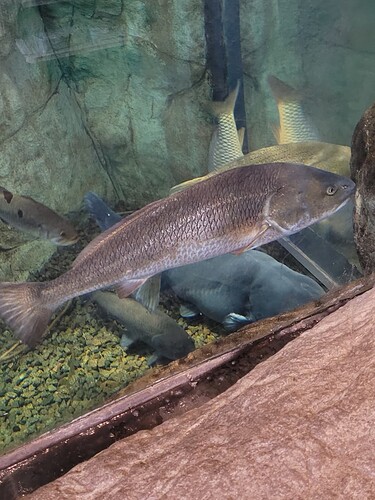 It reminds me of a redfish.

I believe that is a Grass Carp, they’re invasive to the US

NP, I realize from the photo i posted you can’t see the mouth, and it was definitely not a carp mouth. It actually strongly resembled the mouth on the saltwater red drum.

I then found out there is a freshwater drum, too.
I found a few photos online.

What do you think? 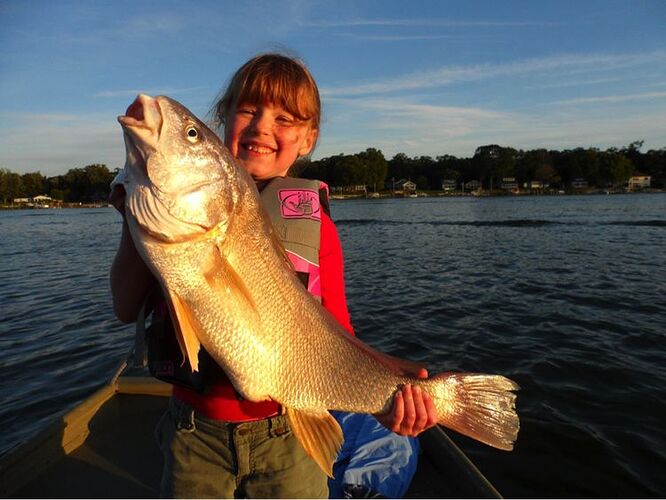 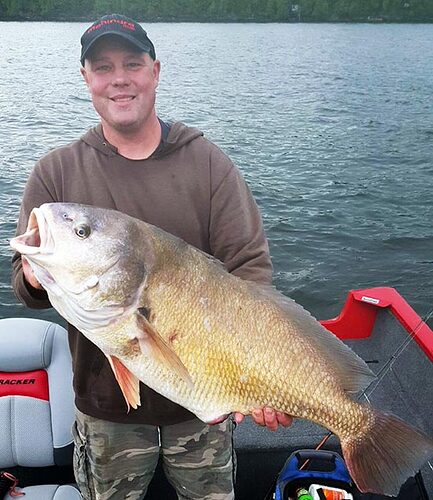 Can you find me a photo of what you mean by redfish? It seems every fish has dozens of local names, and that’s only in English.

Sciaenops ocellatus also known as red drum, but given bass pro tanks are usually freshwater the suggestion that it is a freshwater drum is more likely come to think of it. Either way definitely in the drum group

Drew, so when you and the other guy said redfish you were talking about the same fish as red drum?

If so, that’s pretty cool that you could identify drum just from the back.

According to my internet research, this fish cannot be red drum (even ignoring saltwater matters) because it lacks a distinctive spot near the tail.

However the same internet says the freshwater drum DO NOT have the tail spot, just like my Bass Pro Shop fish.

That’s correct, redfish and red drum are two common names for the same species. Having said that, I agree with you that it is a freshwater drum based on BPS having a freshwater tank, lack of tailspot, and the proportions of the body on your pic!

Red Drum all the way! They need saltwater to reproduce, but they do just fine in fresh!

Red Drum sometimes are found without the distinctive spot! If you google “red drum without spot” you can see a bunch of examples.

Hey Peter, thanks! Yeah i did Google and i found this great article talking about all the wild spot genes. 2,3,4,5,500. Or none.

How Many Spots Can a Redfish Have?

So, i wonder what a freshwater drum is, then? Or is that just a saltie found in fresh habitat?

Saw your introduce yourself post. Where you from? Im from NC, USA

Peter, my first reply to you didn’t tag you for some reason. That’s been happening a lot. Admin!

A Freshwater Drum is Aplodinotus grunniens. I don’t believe they can tolerate salt water and are found pretty extensively all over the Eastern MS drainage. In the photos you sent earlier in the thread, I think you’ll notice the coloration is different and the Freshwater are much broader than the fish in the Bass Pro Tank. A Red Drum (I call em Redfish) is in the same family, but different genus.

I live in upstate SC, but I grew up in Connecticut and have seen Redfish in the tank in Bridgeport.

@Richard_Jordan I should clarify lmao I got it in my head you were at the BPS in Connecticut because they have Redfish in that tank too. I’ve been to the Concord one and seen those fish as well - good to connect on here man! I will happily attempt to answer any fish questions you might have!